Bread & Puppet Theater: Performance of FIRE
followed by a Bread Reception at Sebastopol Grange, 6000 Sebastopol Ave, Hwy 12, Sebastopol.
The Bread and Puppet Theater will tour the Bay Area, performing its original play, FIRE, which catapulted the company to international acclaim 50 years ago. Tickets are $20 or donation. (No one will be turned away due to lack of funds.)
Tickets -http://www.brownpapertickets.com/event/2227275

–“Humans wage war against each other and their own mother: Nature. Essentially war is the ferocious stupidity that insists on the application of brutality for problem solution, whether the brutality is directed at humans or mountaintops. “FIRE” is a chapel against war, where you sit down to witness the effects of war while contemplating its opposite.” –Peter Schumann

In 1965, Schumann and his troupe presented FIRE, a hard-hitting piece about the Vietnam War, to critical acclaim at the Nancy Theater Festival in France. FIRE shows six days in a Vietnamese community, followed by a bombing raid and ending with a self-immolation. Dedicated to three Americans who immolated themselves in protest against the Vietnam War, FIRE is performed with life-size puppets that resemble their masked manipulators. (This show may not be appropriate for young children.)

Founded by Peter Schumann in the early 1960’s, Bread and Puppet was enmeshed in the radical counterculture and earliest demonstrations against the U.S. involvement in Southeast Asia, becoming a familiar presence in the protest movement. Meanwhile, the puppets grew bigger and bigger—some up to 18 feet high—leading processions that spanned blocks and mobilized hundreds of people. Bread and Puppet became a seminal part of the avant-garde movement that included companies such as the San Francisco Mime Troupe, Living Theater and Robert Wilson. 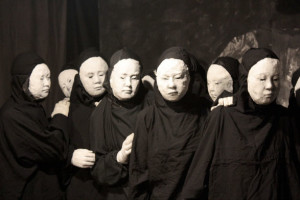